In the days following, Yoko endured a “loud, dissonant, harsh” aural experience. Incessant beeping
and bleeping coming from the machines on the ward impeded her feeling better. Yoko, speaking to Quiet Times, and ever so softly in a lilting Japanese accent, is an ambient electronic musician. Her delicate and musically attuned ear identified that the monitor some two beds down was “repeating the note of C. And across the hallway, something was beeping in a high pitched F#. This was clashing inharmoniously with hers, ringing “a higher pitched F#”, causing a diminished fifth, a tritone; historically regarded to be the most sinister chord, banned from churches in the middle ages.  To an untrained ear, this might be annoying. For a musician, this was a nightmare!

‘Was this the way alarms were supposed to sound?… Do they have to sound this way?’ she began to wonder. Her pursuit, to want to change the sounds heard in hospitals, would lead to Dr Elif Özcan (Vieira) an eminent researcher in sound design, professor at TU Delft and Director at its Critical Alarms Lab, in the Netherlands, who’s also talking to Quiet Times. 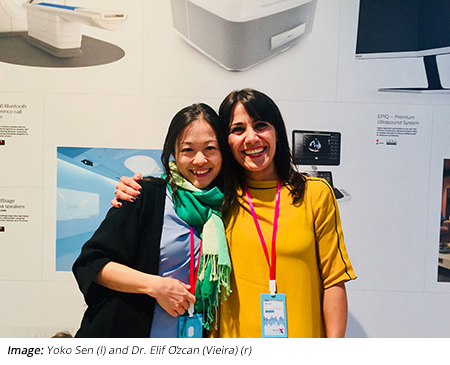 Yoko’s experience was something Elif herself is exploring, ‘acoustic biotopes’. Take her scenario where, in Yoko’s words, both the ‘beepers’ and the ‘beeped’ exist. Those that need to hear the sounds to properly monitor, give care, and do their job (the beepers), are forced to co-exist with those hearing what only know as noise (the beeped).

Derived from ecology and biology, in an acoustic biotope, both parties are hearing the same things in their shared environment, but their experience of that sound is totally different.

Alarms we use at home have meaning, like wake up, or you have email. We’re not used to a wall of sound without meaning. Yet caregivers are. Their acoustic fandango requires they monitor every alarm, from every patient’s machine, distinguish between machines, and know just which are informative versus those requiring urgent attention now. Right now.

Yoko tells us that up to 95% of those alarms can be deemed ‘clinically insignificant’, and introduces us to another term ‘alarm fatigue’.

While an expert nurse may instantly recognise which 5% to really listen for, those newer to the vocation may conversely want to hear all 100%, as Elif explains.

“Nurses actually use these alarms as a way of distance monitoring” where unlike visual monitoring, you’re not “stuck to the screen”. This liberates them to “get medication, help other patients”.

Their notifications probably aren’t urgent. “Warn me half an hour before the syringe pump is empty… and 5, and 2 minutes before.” While, OK, this could have been just one alarm, “you’re mentally preparing yourself to help the patient, through alarms”.

One accepted truth is alarms don’t sound as friendly as they could. Bearing the frailty of old age or ill-health in mind—Yoko has taken to researching, and asking, ‘What’s the last sound you’d like to hear?’.

“Nature, oceans, waters and rivers” comes in a calming first place. Second is the sound of our loved ones. The third is more poetic. “It’s an orchestra, tuning up, getting ready for a performance". It might be Yoko’s musical influence, but as a last thing to hear, that seems rather apt.

Elif echoes that Yoko’s artistic perspective “brings poetry to the design problem”. “Artists are very observant. Putting yourself in another’s shoes—that’s when you start to design with a different mindset.”

Professor Elif is a keen collaborator. She recalls an experiment where both questioning nurses about sound, and installing sensors to monitor sound levels, had the by-product of increased awareness of the nurses in that sound environment.

Asking for contributions towards research “prepares them to one day accept a radical innovation”. Something developed without them, they would probably “never accept”.

Yoko tends to focus on the warmer human side in her primary research. ‘Is this a kind of sound you can hear over and over without getting tired?’ or checking whether you ‘could hear [this] when very sick and in pain?’ “Product sounds are the voice of a product…” says Elif. “Designing a sound, one should therefore listen to what a product has to say.” Her past work has taken her to space (or the European Space Agency, at least) where ‘woody’ tones gave a nod to searching for extra-planetary life. Her branded work has seen her differentiate car manufacturer’s dashboard audio. A Toyota’s bubbly, airy, sounds are vastly different to a Lexus’ cooler harder tones.

In stark contrast to the ‘wall’ of hospital sound, her Space Agency work implemented a series of levels of alarms, rising in necessity to act, after she observed an even worse ratio of 2 out of 144 noises being ‘actionable.

They created “confirming sounds… increasing to warning sounds, alarming sounds, finally to urging”—telling the listener “the mission is going to fail if you don’t act”.

Acoustics in the room is one option that Yoko’s Sen Sound team have suggested. “The reflection of the room can make the sounds more uncomfortable”. Ceiling tiles designed to absorb sounds like those found via the Quiet Mark Acoustics Academy are one possible antidote. Yoko summarises “it’s [about] freedom from irritation”.

Even a preference for a gentler tone in speech, closer to Amazon’s Alexa or Apple’s Siri has been expressed by patients. So one day the whole soundscape of the hospital may be up for grabs.

‘One day’ being the operative words here. While it’s tempting to move quickly, these are life and death situations, so an abundance of caution is virtually mandatory.

“Radical change is good, it makes people want to understand the system, but at the same time, healthcare… is very conservative. Everything needs to be 110% and a well oiled machine” says Elif. The only way to respond is incrementally—bit by bit. Image: "Sounds of Caring: New York" is dedicated to every healthcare and essential worker around the world

Yoko’s had this confirmed almost word for word as part of her inspiring ‘Sounds of Caring’ project,  an online mini-series, made during the height of the pandemic, which asked healthcare workers two questions: ‘How are you feeling?’ and ‘What would you  like others to know about what you’re experiencing right  now”?

The people behind the beeps—engineers and designers at medical device companies—are listening carefully. “To hear who they might usually call ‘users’ or ‘customers’, as human beings, to know that the work that they do, [has] a tremendous impact on their day to day”.

One oncologist told her “any little change…goes a long way”.  This matches Yoko’s desire to only ever make subtle and gradual improvements. To “never suddenly alter” sounds to avoid upsetting clinicians—or anyone missing a vital alarm.

Elif appreciates that involving more people makes any brief more complex, but then their involvement makes them more open to change. She asks, “how do we interact with sounds, so that we’re better versions of ourselves? So the noise doesn’t disturb us…and we’re a better patient.”

When we think of sound design, we often think of people sitting behind desks with lots of faders. But both Yoko and Elif should really be described as sound-driven designers.

“Design helps you change your behaviour…” says Elif, and they are both using sound as the catalyst for change. Even basic materials can trigger an effect.

“Something as simple as a poster in a ward, can create awareness [and] sensitivity towards sound. This can begin an initiative, a wider discussion on a bigger issue. And from this you set out to really change behaviour.”

If you would like to learn more about the work that Yoko and Elif are doing, you can listen to their episodes of The Quiet Mark Podcast, by clicking the thumbnails below: 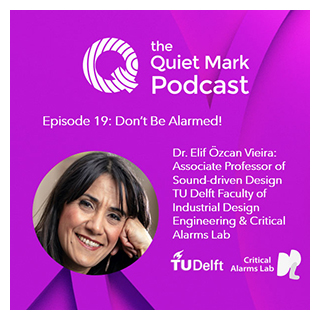 Quiet Times speaks to Ping Coombes and Henk Huisseune about the role that sound plays in how we cook, as well as how we enjoy our kitchens at home.